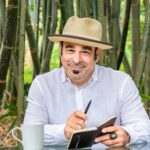 That’s what Eric Saperston wants for you. He returns after many years to share his wisdom born of research over cups of coffee with some of the most successful folks on the planet. Plus there’s his book, “Live In Wonder.”

Aria Finger, COO of DoSomething.org, gives ideas for motivating teens and finding their passion points to get them engaged in your work. (Pre-recorded at last year’s NextGen:Charity conference.)

Eric’s journey took him across the U.S. in a VW microbus, inviting 200 of the country’s most famous and powerful to coffee. Eric Saperston is chief creative officer at Live In Wonder, and he learned some amazing lessons over coffee. His story is told in the Disney documentary, “The Journey.” (Pre-recorded at last year’s NextGen:Charity conference.)

Maria Semple, The Prospect Finder, and our regular prospect research contributor, goes deeper into Google search. How do your search results differ when you’re logged in or not logged in to Google? Plus, advanced search tips. It’s a short course on search to help your prospecting.

Here is the link to the audio podcast: 080: Take On Teens, Pursue Your Hero’s Journey & Going Greater Into Google Search