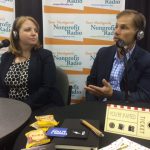 Keeping the donors you have saves money and increases efficiency over acquiring new ones to replace them. Retention tactics come from Rachel Clemens, president of Creative Suitcase, and Sean Doles, vice president of mission advancement at YMCA of Austin. We talked at the 2016 Nonprofit Technology Conference.

Amy Sample Ward returns from maternity leave with social strategies that close out your 2016 and align with your critical 4th quarter fundraising. She’s our social media contributor and CEO of NTEN, the Nonprofit Technology Network.