We kick off with Gene Takagi explaining how–but first, whether–your nonprofit can help disaster victims. You need a lot more than a big heart and a CrowdRise page. Gene is our legal contributor and principal of NEO, the Nonprofit & Exempt Organizations law group. 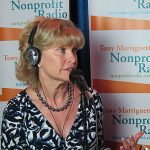 Get committed major donors from your events by making them transformational, not merely transactional. Pat Clemency has before-, during- and after-event ideas. She’s president and CEO of Make-A-Wish Metro New York and Western New York. You’ll learn lessons from Rochester and Buffalo. (Originally aired on October 24, 2014.)

There are a lot of ways to help Hurricane Sandy victims. Here are a few that I announced on today’s Nonprofit Radio:

I know Craig has already passed $25,000. People can still donate.

The NYCC Downtown Brooklyn office will be open from 8 a.m. to 8 p.m. every day and is in urgent need of donated supplies, which can be dropped off at their conveniently-located office. They’re also accepting volunteers—especially those with vehicles who can help deliver aid. Have questions? Email Info at nycommunities dot org or call (347) 410-6919 extension 286. Their address is 2-4 Nevins St, 2nd Fl Brooklyn, NY 11217.

Make the Road — If you can make it to Staten Island, Make the Road needs supplies to distribute there, especially non-perishable food and warm clothes and blankets. Their Staten Island office is open from 9 a.m. to 5 p.m. at 479 Port Richmond Avenue, Staten Island, NY, 10302. For more information, email Daniel.Coates at maketheroadny dot org or call (718) 727-1222 extension 3445.

You can text a $10 donation to the following charities:

We’ll add more resources as we learn of them. Also, please feel free to leave links to resources in the comment section below.

Bill McGinley, president and CEO of The Association for Healthcare Philanthropy (AHP) and Nancy Johnson, senior consultant at Target Analytics, sat with me at the bbcon conference to talk about healthcare grateful patient fundraising: why these prospects are critical and very generous; privacy concerns; and, how to start the relationship.

Charities want to help Hurricane Sandy victims. In the rush to help you can’t ignore the rules around private benefit, needs assessment and documentation. You’ll be on the right path with our regular legal contributors Gene Takagi and Emily Chan, from the Nonprofit & Exempt Organizations Law Group.

Here is a link to the audio: 116: Grow Your Grateful Patient Program & Disaster Relief. You can also subscribe on iTunes to get the podcast automatically.
View Full Transcript