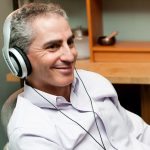 It’s me. I know a little about Planned Giving fundraising. I’ll give you tips, tricks and strategies to kickoff your wills campaign this year.