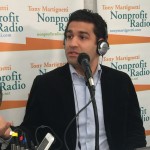 These one-on-one meetings are critical to your prospect research. Maria Semple, our prospect research contributor and The Prospect Finder, makes sure you’re getting the most out of them. She also shares her recommendations for summer conferences throughout the U.S. that will help your research.