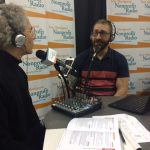 When it comes to digital testing and learning from the results, there are no losers. Steve Daigneault and I step through lots of tests on font type and size; wording; single-button versus multi-button appeals; and several more. He’s senior vice president at M+R consulting and we talked at the 2016 Nonprofit Technology Conference.

What’s the value of knowing your potential donors’ political donations and where do you find the info? Maria Semple is our prospect research contributor and The Prospect Finder. Her latest book is “Magnify Your Business.”