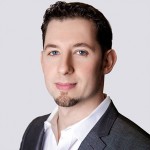 Jonah Halper is author of the new book “Date Your Donors.” He wants you to enjoy the full breadth of fundraising relationships. He’s founder and partner of Altruicity consulting and he’s with me for the hour.