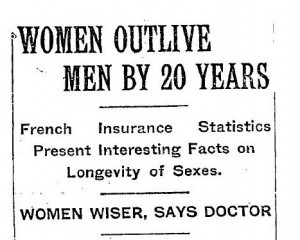 Before looking at the implications, I should substantiate the facts. I think it’s well known that women live longer than men, but the gap is considerably narrower than it was a hundred years ago. This charming 1912 New York Times article put the gap at 20 years. About.com puts it between 3 and 4 years today.

Earlier this month, The Chronicle of Philanthropy reported unmarried women, irrespective of why they’re unmarried, give more to charity than similarly situated men.

Interesting to me, the article quotes the director of the Women’s Philanthropy Institute to say, “The conventional wisdom is that women do not give a lot of money.” I must be uninformed, because I’ve never heard that and don’t believe it’s true. The director continues, saying the conventional wisdom is wrong. Sometimes it pays to be uninformed. I save myself a lot of back-and-forth.

The implication for fundraisers: don’t piss off women. If that colloquialism offends your sensibilities, and you prefer my admonition more genteelly, don’t evoke the ire of women. Especially if you do planned gift fundraising.

Where the principal relationship to your charity is with the male, and there’s a female he’s close to, involve her. Send invitations to the couple, if appropriate. Do the same with gift acknowledgements. You are snubbing someone important when the gift is from a married, or partnered, couple and you address your thank-you letter to the man. You’ll probably never hear the objection. It has been quietly noted by the one who will likely live longer.

At events, do you engage the wife or female significant other? Are you introducing her to your CEO, or asking for a moment of her man’s time while you pull him away?

Making (off color) inside jokes that marginalize women is a sure way to shoot your long-term fundraising in the foot. (You’ll hurt yourself in other ways, too, but I’m sticking to fundraising.)

Wives outliving their husbands, on average, means significant wealth will transfer to wives from their husbands’ estates. If you’re in Planned Giving, you’d like the best shot at having the wife remember you in her estate plan. So be good to her while her husband is living.

Where the husband is the primary donor to a nonprofit, I’ve always thought it a mistake to presume, upon his death, the widow has no interest in continuing the relationship. She may very well have her own charitable interests that don’t coincide with her husband’s, but nothing is lost in inquiring by polite letter–after many months have passed since the death–whether she would like to be kept on the mailing list. If you get no response, or a negative one, you know where you stand.

You have the best chance of maintaining a relationship with a woman–including a widow–if you treat her courteously at all times, according her the same respect, professionalism and friendship you show a man, whether she’s attached to one or not.

4 thoughts on “Fundraisers Should Not Piss Off Women”