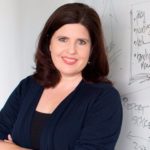 And to change systems, you need to employ networks. Those networks need leaders and facilitators. Enter Heather McLeod Grant. She is co-author of the workbook, “Leading Systems Change.”

Silicon Valley boasts 76,000 millionaires and billionaires and revolutionary innovation. Yet local nonprofits struggle to meet demand and suffer inadequate reserves. Researchers Alexa Cortes Culwell and Heather McLeod Grant explain the disconnect⎯and the lessons for your organization. Their report is “The Giving Code.”