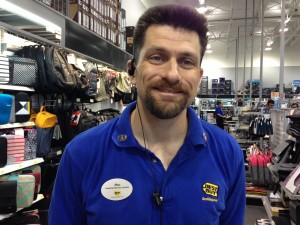 Two customer service reps recently reminded me of the value of straightforwardly asking for what you want. Asking politely, confidently and firmly, which is how fundraisers should solicit potential donors and prospects.

Billie (Mac) McBain at Best Buy in Aberdeen, NC asked me in all the right ways to fill out an online survey, rate the store a 10 and explain how he helped me buy the right charging cable for my wife’s MacBook Pro. I obliged, but only after sharing my impression with the store manager and Mac together. I also tweeted my admiration.

Just last week, Port Authority of NY & NJ customer service rep Mohammed Alam helped me save a buck when I bought an AirTrain ticket on my way home from JFK airport. As he explained the procedure, he wrote his name on a business card and handed it to me. OK, he didn’t explicitly ask for my help, but the implication was clear and confident. I happily dashed off an email to HQ. (Which sent back a lackluster form reply ignoring my enthusiasm. Boo!) 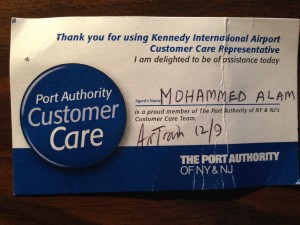 Both were terrific, fun, sure-footed solicitations that got me to give what was asked. Bravi, gentlemen, bravi!

Let’s bring this back to what I know something about. It’s painful when I see a weak fundraising solicitation.
— An email or letter where the ask is buried in the middle of the fifth paragraph
— One that never comes around to make an ask
— A solicitor who apologizes
— A solicitor who just isn’t comfortable asking for money, or other support
— I had a client where the executive director insisted his letter should “humbly ask”

Gutless solicitations demean your work and discourage support. They’re embarrassing for everyone and suggest you don’t believe in the cause.

You believe in the cause, right? Or else you wouldn’t be there.

Here are a few tips:
— Rehearse: many Nonprofit Radio guests have suggested this. You role play the solicitation meeting. Lots of pros use this.
— Prepare in advance: last minute preparation is inadequate; this is an important meeting!
— Not so many pages or screens: lots of notes suggest you don’t know your subject; that’s why you prepare.
— You host: when meetings are in your office, you control the flow and prevent interruptions.

For serious help with strong asks, check out Asking Matters. You can find your asking style (rainmaker; go-getter; mission controller; or kindred spirit), which will help you approach others, and show you how to support volunteer solicitors. (Follow president Brian Saber.)

When she was with Asking Matters, I had Andrea Kihlstedt on Nonprofit Radio. The link to listen to our convo is at the bottom of this post.

Ask for what you want with firmness and confidence. Ask from a position of strength.

Andrea reveals what it means to be a Kindred Spirit or a Mission Controller, two of the four asking styles profiled at AskingMatters.com, which she co-founded.

Please take a moment to take the survey for this week’s show! Thanks!

Don’t forget to subscribe to the show’s podcast on iTunes. Download and listen whenever and wherever you want.

Here is the link to the podcast: 066: A Conversation With Andrea Kihlstedt
View Full Transcript