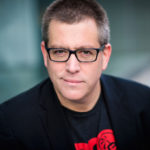 Up to 30% of the workforce will be neurodivergent in the next 10-15 years. What is it and how can you get the competitive edge today by taking advantage of these specially-talented workers’ skills? Peter Shankman returns to share his quite personal explanation.