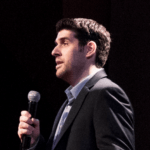 Resuming our #22NTC coverage, Dan Berstein helps you identify these situations, decide whether and how to speak up, and mitigate your own potential biases and accept feedback. He has mental health resources for you at bit.ly/mhskills and bit.ly/TMHDashboard. Dan is from MH Mediate.