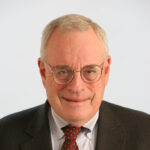 That’s Warren McFarlan’s new book. It’s written for potential board members, but it’s a valuable study for those on the ground, doing the work.