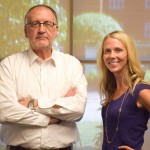 The University of Pittsburgh has created a career ladder to stem frontline fundraiser turnover—and it includes incentive pay. Explaining Pitt’s innovation and helping you think through whether this makes sense at your organization are Dave Dalessandro and Liz Cooper, fundraising administrators at the University. (Originally aired August 28, 2015)