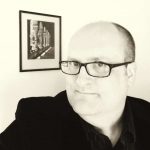 John Hicks returns with 9 steps that will burn the tires off your grants program. He’s principal and founder of DLBHICKS LLC consulting.