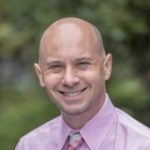 “No One Dreams of Being a Fundraiser.” It’s a nonprofit truism and Mitchell Linker’s new book. He and his music are with me for the hour.