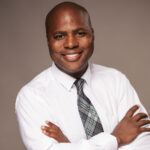 Don Gatewood shares his extensive experience with professional and personal mentoring—as both mentor and mentee—so you know what to think about before you enter a mentoring relationship, and what to expect. He’s with The Initiative Baltimore.