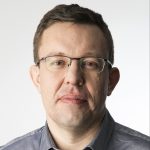 Why do some leap ahead while others fall behind in our chaotic, connected age? Co-author Henry Timms, president & CEO of 92nd Street Y, has the answers from his new book, “New Power.”