Chris Field: Be A Disrupter 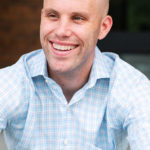 Chris Field has been disrupting since he ran for mayor at age 19. His book, “Disrupting For Good,” tells the stories of unheralded, disrupting folks from age 5 to 77. And encourages you to do the same. Thankfully, he’s with me for the hour. He’s the perfect guest to round out our Innovators Series.