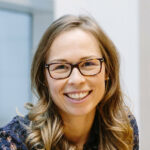 We all know we ought to learn from failure. But most of us don’t have that healthy relationship with failure. Ashley Good reveals the breakdowns to help us improve the relationship. Her consultancy is Fail Forward.