Brian Lauterbach: Automated Fundraising
Brian Lauterbach is from Network for Good. He reveals how automation can enhance your donor communications, engagement and stewardship. This was also recorded at 19NTC. 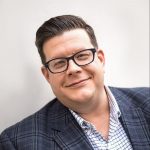