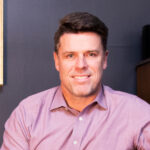 Our #22NTC coverage resumes as Adam Garone shares his experience growing the individual donor base and driving transformational change at Starlight Children’s Foundation.