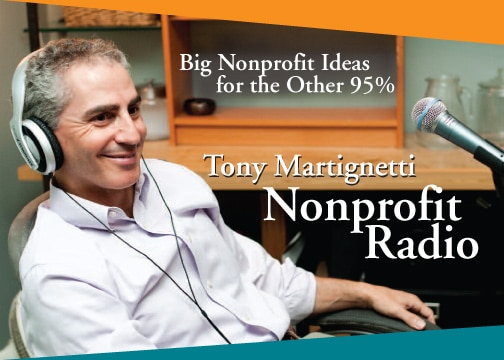 Tony Martignetti Nonprofit Radio had its 100th show on July 13. I had a bunch of contests and the winners are in. The show was great fun! If you didn’t catch it, you can listen to the podcast.

Mary Lynn Halland won an hour of consulting by me, in Planned Giving or Charity Registration. She submitted a question in advance to the show’s LinkedIn group.

Linette Singleton won “Open Community: A Little Book Of Big Ideas For Associations Navigating The Social Web.” She named Ken Berger as the CEO of Charity Navigator, who’s been a guest on the show.

Maria Semple identified “great vengeance and furious anger” as a line from “Pulp Fiction.” I used it to express how I’d feel if you didn’t listen to the show. Maria won the book “Brandraising: How Nonprofits Raise Visibility And Money Through Smart Communications.”

There’s an NTEN t-shirt and pair of sunglasses still to be awarded to a podcast listener. Check out the podcast and claim your prize.

Thank you NTEN and Amy Sample Ward for donating our prizes!

Last week I did a stand-up comedy set at Gotham Comedy Club in New York City. Thank you to everyone who came out! Here are two short clips from a set I did earlier this year.

I wish the same for you.