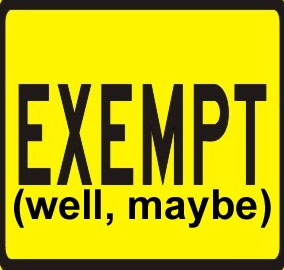 Late last week, The Chronicle of Philanthropy and The New York Post reported that 925 New York City charities lost their property tax exemption because they failed to demonstrate a legitimate charitable purpose to the city’s Department of Finance.

According to The Post, one of the challenged charities, American Youth Hostel, plans to appeal because it has been a recognized charity since 1934, presumably relying on the IRS’s determination that bestows tax-exempt status.

Not long ago, that federal 501(c)(3) charitable designation would have been sufficient to stave off a local or state inquiry into whether tax-exempt status is warranted. No longer.

My hypothesis is that as New York City scrambles for new revenue sources, tax-exempt charities are in Finance’s sights.

That was the case last August when The New York Time’s Stephanie Strom (whose coverage of the national philanthropy beat I sorely miss), reported California charities coming under scrutiny.

Last Friday for Tony Martignetti Nonprofit Radio I interviewed Paul Clolery, editor-in-chief at The Nonprofit Times, at a fundraising conference. He’s concerned about corporations in California, so called “B Corps” that provide a public benefit, eventually appealing to the state for tax exemption proportional to the percentage of revenue (or some other formula) that is devoted to charitable work. (Video of the interview isn’t available yet, but will link it here when it’s ready.)

As charities on both coasts lose exempt status, would that not be a harsh irony?

There are a few wake up calls for charities. You’ve got to stay true to the work that got you the charitable designation from IRS. Relying on a description of your work that’s decades or generations old won’t suffice. Also, stay in compliance with regulations. I can see a failure to adhere to state or local laws being tied to maintaining tax advantages.

Tell me if you’ve seen other instances of states or cities challenging tax-exempt status.